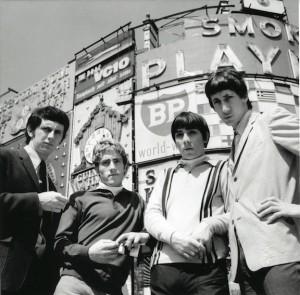 The Who announced their 50th Anniversary tour, The Who Hits 50!, which kicks off April 15 in Tampa, Florida. Tickets for the tour go on sale October 17, but there will be a special Citi card pre sale starting October 13, for those who have a Citibank credit or debit card. The show promises to be an all-encompassing journey, celebrating their forthcoming release also titled Who Hits 50!, which comes out October 27. The tour will be done in two legs. An east coast run will end May 30 Forest Hills, NY, and a west coast leg will begin September 14 in San Diego, California.

Roger Daltrey and Pete Townshend say their days of megatouring are over.

Pete admitted that he can barely contain his excitement once dates are announced, saying he’s quite obsessive about it.

The Who has sold over 100 million albums, and it’s currently only Roger Daltrey and Pete Townshend as original members. Original drummer Keith Moon died September 7, 1978 at the young age of 32 due to a drug overdose. Bassist John Entwistle died June 27, 2002, from a heart attack suffered in a hotel room at the Hard Rock Hotel And Casino right before the group was to start their 2002 U.S. tour.