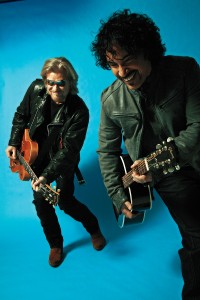 Hall and Oates, who brought you the hits “Private Eyes,” “Rich Girl,” “Man Eater,” “Private Eyes,” and others, has set dates for a summer tour starting May 13 in Dallas, Texas. Opening for them will be Sharon Jones & The Dap-Kings and Trombone Shorty & Orleans Avenue. Dates run through September 23 in Las Vegas, Nevada. Citicard Members have had first access to tickets as of yesterday, and a special Live Nation pre-sale was underway starting at 10am today (February 10). General onsale dates start on Friday, February 12, at 10am at www.livenation.com.

Comprised of Daryl Hall and John Oates, the duo was awarded the BMI Icon award in 2008, and they entered into the Rock And Roll Hall Of Fame in 2014. Oates talked about how rock and roll has been the most important export America has ever had.

Hall And Oates are the Number One selling duo in music history.

Dates for Hall And Oates Summer Tour are as follows: