The downtick in smoking has created a market for herbal vaporizers and finally heavy metal has a line they can call their own. Testament’s Chuck Billy has released “The Chief” his signature vaporizer pen. The first 1000 will be personally signed by Chuck and is available at Lordvaporpens.com. The design of Native Blood reflects Billy’s heritage and culture of being Native American.

Stoner metal outfit Torche has announced summer tour dates on the heels of their current leg in support of their new effort, Restarter. The group is in Columbus, Ohio tonight, but has mostly eastern North American dates set for the rest of March. The summer dates begin July 2 in Portland, Oregon and traverse the western part of North America. The group will also head to Europe in May and early June. 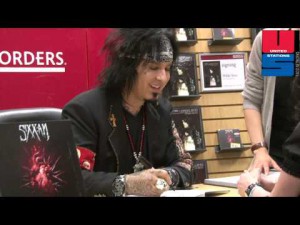 Lastly, Nikki Sixx, bassist and songwriter for Motley Crue and Sixx A.M, will be featured on a VH1 special titled VH1 Rock Icons. The episode will feature more on Nikki’s drive to succeed, making his ideas come to fruition, and successes rather than his sordid past. It airs March 28 at 10pm on VH1, and coordinates with the launch of Sixx A.M.’s first headlining tour.